Enter July and the Spotted Lanternflies

Spotted lanternflies may look pretty, but there is nothing glamorous about them. A relatively new invasive species to the U.S., they were first documented in 2014 in Pennslyvania; it is indigenous to parts of Asia. They pose a threat to agriculture throughout the areas they invade.

How to Spot a Spotted Lanternfly: 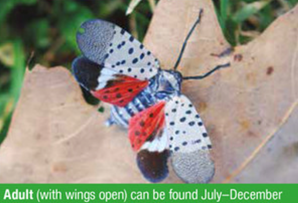 Photo Credit: The University of California Agriculture and Natural Resources

Dangers:
Spotted lanternflies cause damage to plants by excreting a sticky, slippery “honeydew” that creates mold, interferes with a plant's photosynthesis, and can stunt its growth and, ultimately, their harvest. Although they don’t fly, spotted lanternflies are great hitchhikers as they are known to cling onto traveling cars at 50 mph. They can be found hiding under car hoods, near windshield wipers, in the wheel wells of tires, and nestled under bumpers. It is important to check your vehicle for the insects and their eggs, and if possible, park away from trees where spotted lanternflies are known to be present with your windows closed.

Do not panic; spotted lanternflies will NOT sting or bite humans or animals. However, the honeydew substance they excrete attracts stinging insects, which can be dangerous for those with allergies. If you’ve spent any time in an area infested with spotted lanternflies, checking for egg masses, adult flies, and nymphs on your vehicle and any other items that may have transported the insect is essential.

Get started with one of our Home Pest Prevention Programs and protect your property from spotted lanternflies and other invasive pests.
Call our pest experts at (833) 493-1873 to start today!

Get a free estimate

If you have questions about our services, plans, or pricing we are here for you. Fill out the form below and we will communicate with you by email (and of course provide you with a free estimate).